Integral in the Diagnosis of Concussions and Traumatic Brain Injury

East Houston Hospital & Clinics is led by physicians who combine state-of-the-art medicine with patient-centered care. ADHS hospitals offer the Subacute Trauma Program – the only one of its kind in the Southwest region. Within the program, the Texas Brain Center provides best-in-class care for traumatic brain injury and brain disease. Leading-edge diagnostic technologies play an integral role, including the powerful MRI with Diffusion Tensor Imaging (DTI). East Houston Hospital & Clinics has DTI capabilities, which helps patients achieve Maximum Medical Improvement (MMI). Highly sensitive, DTI yields quantitative assessment and diagnosis of traumatic brain injury earlier. For patients whose MRI tests are normal, yet have persistent or worsening symptoms, this is game-changing.

Diffusion Tensor Imaging (DTI) is a state-of-the art diagnostic tool which uses advanced MRI technology to detect traumatic brain injury not visible on conventional MRI, CT or other imaging modalities. DTI identifies diffuse axonal injury (DAI), which occurs primarily in the white matter tracts of the brain. Real brain injury occurs even after mild trauma, and is accompanied by brain dysfunction. DTI allows for the visualization of the brain’s pathologic features while providing objective evidence of cognitive decline.

Traumatic brain injury (TBI) is a common yet underdiagnosed problem that affects more than 1.7 million people and results in over 52,000 deaths annually. The most common causes of TBI are motor vehicle accidents, falls, assaults and sports-related injuries. The clinical symptoms of TBI range from mild cognitive impairment to severe disability. Thirty percent or more will have permanent impairment and 20% are unable to return to work. Neuroimaging plays a critical role in the acute setting of traumatic brain injury by detecting injuries that require acute intervention such as epidural hematomas. However, in the setting of concussions and mild traumatic brain injury, conventional imaging is typically normal. 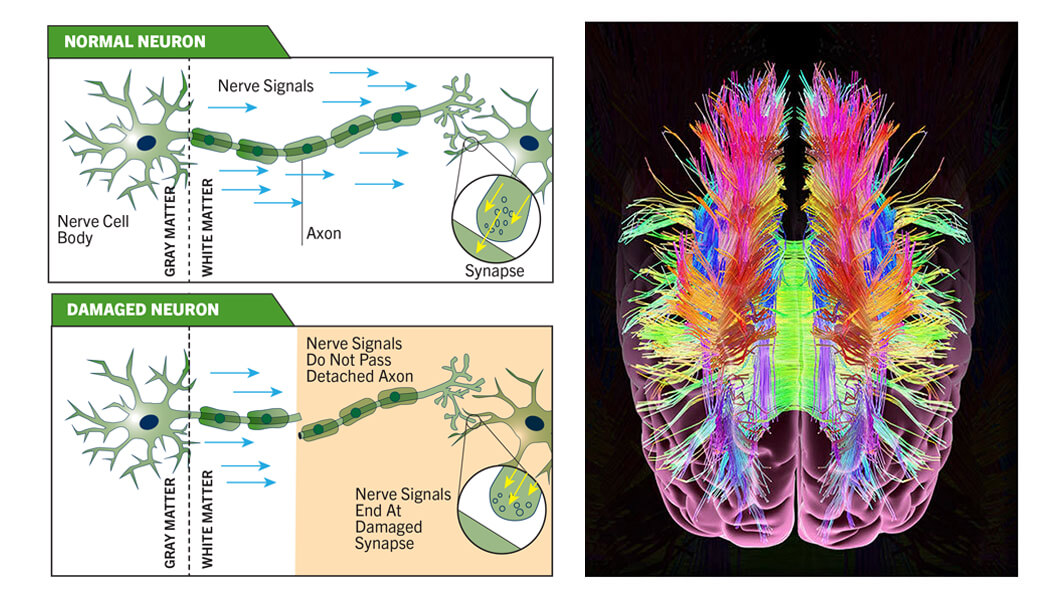 The white matter of the human brain is composed of axons. These axons travel from gray matter, wherein the cell bodies of the neurons are located, to other areas of the brain or spinal cord (see diagram above). Axon bundles traveling together constitute white matter tracts which connect specialized yet segregated regions of the brain. DTI allows for visualization of these white matter tracts by imaging the directional movement of water molecules (anisotropy). In white matter tracts, water tends to have a preferential diffusion along the axons. Imaging brain anisotropy can yield useful information about white matter architecture and integrity, and demonstrate occult pathology.

With appropriately applied magnetic field gradients, MR images can be sensitized to diffusion, or the random motion of water molecules in the tissue. Water movement is essentially random in the brain gray matter, but diffusion is anisotropic or directional in the white matter tracts. The axonal membranes and myelin sheaths present barriers to water motion in the directions other than parallel to the fiber orientation.

DTI tracks the degree to which the water molecules are moving with random Brownian motion. A molecule that is constrained by a white matter fiber tract and its myelin sheath moves along the length of such a structure unless injured.

In summary, detection of ultrastructural damage by using DTI is a major advancement in the diagnosis of TBI. Executive function, which is largely dependent on the dorsolateral prefrontal cortex, is commonly impaired after mild TBI and is a major contributor to disability. DTI provides objective evidence of brain injury related to impairment even in the setting of otherwise normal imaging.

Available at the ADHS Hospitals 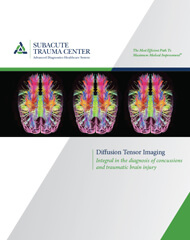